Ibiza (Catalan: Eivissa) is a Spanish island in the Mediterranean Sea off the eastern coast of Spain. It is 150 kilometres (93 miles) from the city of Valencia. It is the third largest of the Baearic Islands, an autonomous community of Spain. Its largest settlement is Ibiza Town. Its highest point, called Sa Talaiassa (or Sa Talaia), is 475 metres (1,558 feet) above sea level.

Ibiza has become famous for its association with nightlife, electronic dance music that originated on the island, and for the summer club scene, all of which attract large numbers of tourists drawn to that type of holiday. Several years before 2010, the island's government and the Spanish Tourist Office had been working to promote more family-oriented tourism, with the police closing down clubs that played music at late night hours, but by 2010 this policy was reversed. Around 2015 it was resumed.

Ibiza is a UNESCO World Heritage Site. Ibiza and the nearby island of Formentera to its south are called the Pine Islands, or "Pityuses".

In 654 BC, Phoenician settlers founded a port on Ibiza. With the decline of Phoenicia after the Assyrian invasions, Ibiza came under the control of Cathage, also a former Phoenician colony. The island produced dye, salt, fish sauce (garum), and wool.

A shrine with offerings to the goddess Tanit was established in the cave at Es Cuieram, and the rest of the Balearic Islands entered Eivissa's commercial orbit after 400 BC. Ibiza was a major trading post along the Mediterranean routes. Ibiza began establishing its own trading stations along the nearby Balearic island of Majorca, such as Na Guardis, and "Na Galera" where numerous Balearic mercenaries hired on, no doubt as slingers,[a] to fight for Carthage. 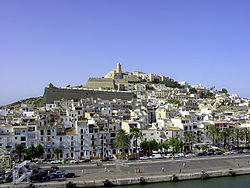 View of the old town from the port

During the Second Punic War, the island was assaulted by the two Scipio brothers in 217 BC but remained loyal to Carthage. With the Carthaginian military failing on the Iberian mainland, Ibiza was last used, 205 B.C, by the fleeing Carthaginian General Mago to gather supplies and men before sailing to Menorca and then to Liguria. Ibiza negotiated a favorable treaty (Foedus) with the Romans, which spared Ibiza from further destruction and allowed it to continue its Carthaginian-Punic institutions, traditions and even coinage well into the Empire days, when it became an official Roman municipality.

After the fall of the Western Roman Empire and a brief period of first Vandal and then Byzantine rule, the island was conquered by the Moors in 902, the few remaining locals converted to Islam and Berber settlers came in. Under Islamic rule, Ibiza (Yabisah) came in close contact with the city of Dénia —the closest port in the nearby Iberian peninsula, located in the Valencian Community—and the two areas were administered jointly by the Taifa of Dénia during some time (11th century).

Ibiza together with the islands of Formentera and Menorca were invaded by the Norwegian King Sigurd I of Norway in the spring of 1110 on his crusade to Jerusalem. The king had previously conquered the cities of Sintra, Lisbon, and Alcácer do Sal and given them over to Christian rulers, in an effort to weaken the Muslim grip on the Iberian peninsula. King Sigurd continued to Sicily where he visited King Roger II of Sicily.

The island was conquered by Aragonese King James I in 1235. The local Muslim population got deported as was the case with neighboring Majorca and elsewhere, and Christians arrived from Girona. The island maintained its own self-government in several forms until 1715, when King Philip V of Spain abolished the local government's autonomy. The arrival of democracy in the late 1970s led to the Statute of Autonomy of the Balearic Islands. Today, the island is part of the Balearic Autonomous Community, along with Majorca, Menorca, and Formentera.

Though primarily known for its party scene, large portions of the island are registered as UNESCO World Heritage Sites, and thus protected from the development and commercialization of the main cities.

A notable example includes the Renaissance walls of the old town of Ibiza City which were awarded UNESCO World Heritage Status in 1999, they are one of the few world's Renaissance walls that were not demolished, and part of the medieval wall is still visible. "God's Finger" in the Benirràs Bay, where there are one of the most beautiful sunsets, as well as some of the more traditional Ibizan cultural sites such as the remains of the first Phoenician settlement at Sa Caleta. Other sites are still under threat from the developers, such as Ses Feixes Wetlands, but this site has now been recognised as a threatened environment, and it is expected that steps will be taken to preserve this wetland.

Ibiza is the larger of a group of the western Balearic archipelago called the "Pitiusas" or "Pine Islands" composed of itself and Formentera. The Balearic island chain includes over 50 islands, many of which are uninhabited. The highest point of the island is Sa Talaiassa, also known as Sa Talaia or Sa Talaia de Sant Josep at 475 metres (1,558 ft).

One of the best options we have for our clients would be the 2 BEACH HOTELS 3 stars, 300 rooms, 600 beds, seafront; the price can be negotiable.

The sales price for an operating hotel with 4 or 5 stars in this first line location with 300 rooms would be substantially much higher.

It's category of 3 stars could easily rise to 4 stars (or 5 stars), because there is a very good potential to improve the hotel, a little more information:

Then we have the following option:

for congresses and events

Multipurpose hall with capacity for 700 people